Fragrant whites and full bodied reds coming from ancient vineyards where in all probability Ischia was the first outpost of Greek colonization in the Mediterranean. Nestor’s Cup (757 b.C.) discovered in the bay of San Montano, bears an inscription praising the local wine and testifying to the existence of vineyards on the island already in the 8th century B. C. Viticulture in Ischia is characterized by two main features: extremely fragmented plots and vineyards mostly located in impervious areas. Grape picking, entirely carried out by hand, begins in September and lasts until mid October, since the grapes ripen at different times depending on the slopes and altitude. Vines grow in the limited but very fertile plains along the coast, on the terraces adorned with the green tuff (dry stone) walls and even higher up, to an altitude of 600 meters, on slopes so steep that they are served by a single track railway system that was recently simplified. This is a type of viticulture that has been described as “heroic” and similar to that of mountain areas such as Val d’Aosta.

At present 900 hectares of vineyards produce a total 50.000 quintals of the finest quality grapes, both in the varieties and and in the yield. Biancolella and Forastera prevail among the white varieties, along with the less common uva Rilla and San Lunardo.

The red species include Per’e’Palummo, Guarnaccia and Cannamelu. These native varieties have been growing on the island for at least three centuries and are used, either alone or blended, to make DOC Ischia wines, a label that was established in 1966 and therefore is one of the oldest in Italy.

Ischia’s white wines are certainly better known, but interesting red wines are also produced on the terraced slopes of Isola Verde. Regulations allow for the following types: whites  Baincolella, Forastera and Spumante, and also reds Guarnaccia and Per’ e’Palummo, the latter also in a Passito version.

Besides Casa D’Ambra, Ischia’s oldest wine producer, other labels of quality are Pietratorcia ( whose name derives from the ancient wine press made out of a single huge block of green tuff traditionally used in Ischia) Cenatiempo and Tommasone.

THE GUYOT TECHNIQUE OF GROWING VINES 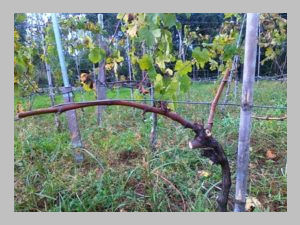 Guyot is a classic method of growing vines on land that is of limited area, not very fertile and usually the driest hill areas. Usually the plant has a trunk of about 70-80 cm onto which is inserted a fruit top of about 6-10 buds that is folded horizontally in the same direction as the row, and a spur of 1-2 buds for renewals the next year. In the classic Guyot system the plant arrangement varies from 1.2 to 2.0 m between rows and 60-70 cm in the row, independent of the vigour, the vine – rootstock combination and fertility of the soil.

THE CUISINE OF ISCHIA

The cuisine of Ischia is an integral part of the Parthenopean cuisine, even if it maintains its own traits and tradition. It is known, in fact, that Ischia, although very close to Naples, was dominated by various people (the Greeks, the Turks, the Spanish, etc.) who inevitably influenced the island’s culinary art. The characteristic distinguishing the gastronomy of Ischia is the constant presence of vegetable garden products since the island was mainly an island of agriculture in the past. The most famous dish from Ischia is “Coniglio all’Ischitana” (rabbit cacciatore) which is rich in wild aromas that are easily found on the island of Ischia; Therefore, it is not a seafood dish but a dish based on products from the land. Other dishes typical of the Ischitana tradition are:

“totano imbottito” (stuffed squid), “totani e patate” (squid and potatoes), “lacierto (lanzardo) alla pizzaiola” (mackerel with peeled tomatoes, garlic and marjoram), “castaurielli  fritti”(variety of fried garfish) and many other fish varieties such as musdee, le occhiate, le lampughe, I pesci castagna; these are all fish that are frequently caught in the sea of Ischia and that today have been valued thanks to several restaurant-owners who have introduced them in their restaurants. Today even the Ischitans who are less particular about culinary art can appreciate the taste of wild oregano and the little tomatoes (è piennoli) and of the capers and garlic from the gardens. These are all products that give the dishes a uniqueness that last over time.